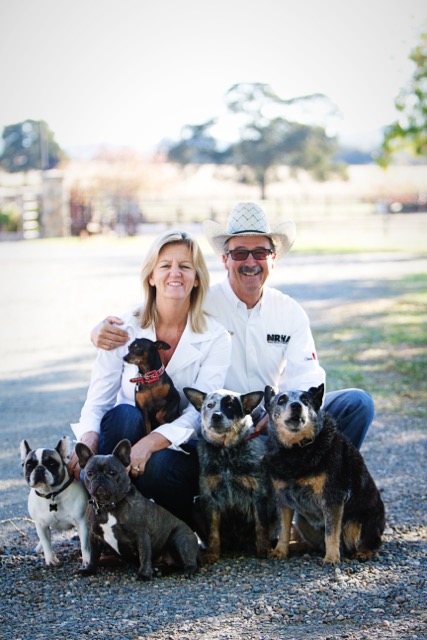 Mike and Barbi met while going to school at UC Davis. Both had shown horses most of their life and where heading towards Vet school. When they became a team, they decided to follow what their “real” dreams where and that was to have a ranch and show quality horses.

Mike grew up in the San Joaquin valley in California. He graduated from Cal Poly SLO and then went on to do Masters work at UC Davis. From there he and Barbi started Boyle Performance Horses and eventually purchased Boyle Ranch. He mainly trained all around horses and showed AQHA until 1995 when he showed in his first NRHA event. At that point, he was hooked and know that he wanted to make a
change and go straight REINING. In 2009 he was the NRHA Intermediate Open Reserve Futurity Champion and the Prime Time Open Futurity Champion winning $87,000+ during that year on Hick A Shine. Then in 2011 he went on to do well again by showing Easy Lil Lady, to the second leading composite score, Open Futurity Finalist and Prime Time Champion at the NRHA Futurity, again winning over $87,000.

Mike has also given back to the NRHA by being on the NRHA board and Executive Board of Directors for 8 years and then voted by his peers to be the 2007 NRHA President. He took over a year off of showing during his Presidency to help run the Association that he has been so closely involved in. Mike was also inducted into the WCRHA (currently the largest Affiliate Club) in 2009. Mike joined the Darling 888 Ranch team in 2011 and 2012 and is now back in California training and coaching. He continues to help guide the Darling 888 Ranch to become a premiere East Coast facility.

Barbi grew up in San Diego, California and also went to UC Davis and studied Agricultural Science with an Animal Science minor. Barbi trained and showed horses, along side Mike for over 22 years. She rode pleasure, hunter under saddle, trail, western riding, cutting, reining and many other events. She won many major championships along with an AQHA Reserve World  hampionship in 1990. Her main focus is to over sees the Broodmares, babies and yearlings, along with the marketing, sales and office and work closely with the Veterinarians. Her goal is the ensure that all horses are cared for in the best possible manner so that they can perform to their highest potential.

Barbi has had the pleasure of standing some great stallions. Topsail Cody resided with Barbi for 12 years until his death at 27 years old. Topsail was an NRHA Open Futurity Champion, Hall of Fame and AQHA World Champion. She also helped start the career of Rowdy Yankee (for 6 years until sold), who is now a Million Dollar sire, due to many of the resulting foals that were bred at Boyle Ranch. She has foaled out hundreds of mares and taught many junior Breeding Managers to be successful in their field. Along with Mike, they are on the Leading Breeder’s List for NRHA and have several broodmares that are on the Leading Broodmare list as well.

The Boyle’s have two children. Brandon was born in 1990 and has recently graduated from UC Santa Barbara with a major in Biology and is starting Pharmacy School along with an MBA program. Brooke was born in 1994 and is starting her college career at Texas Christian University in Fort Worth on an NCAA Equestrian scholarship. Both children have grown up showing Reining horses and have won Many championships. Reining has and always be an integral part of their life.